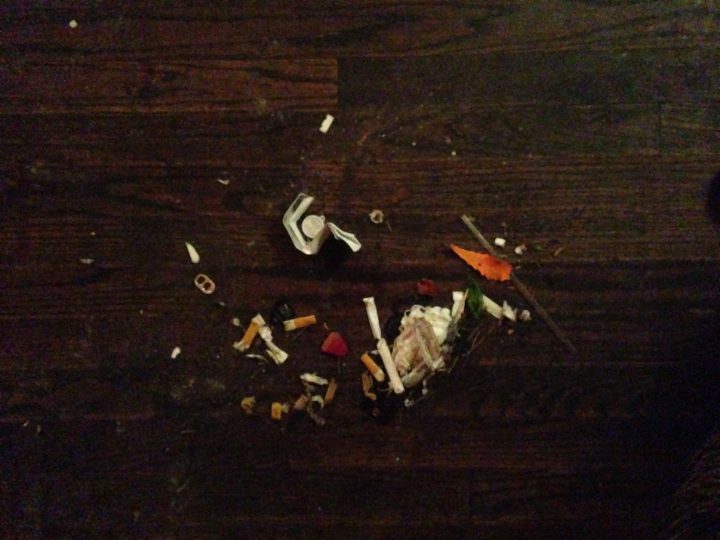 There used to be a store in Union Square called Shoe Mania. It was big with one floor catering to all your boot, sneaker, dress shoe needs and then a basement level where the styles that failed to jump off are being sold at a discounted rate. I am not sure if Shoe Mania was a chain, but the people who worked there wore blue collared shirts with Shoemania printed on the breast, and they all wore a sort of ear piece that allowed them to get the shoes requested by New Yorkers and tourists with blisters. It was not a mom and pop store; rent alone at that location must have cost a fortune. So there I was looking around down in the basement, it was summer, I needed some dress shoes for something so naturally I wanted discounted ones.

The funny thing about Shoemania is that upstairs where the shoes were still full price, there was always an attendant ready to fetch the pair of your dreams, the right size and in all the colors, but in the basement all the boxes were haphazardly stacked with very little rhyme or reason. There was only one attendant in the basement and his job was more a look out than an attendant since there was no special storage place from which to fetch the discounted shoes and the basement was never as crowded as the floor above.   So there I was, looking for my size in some suitable style. I tried on so many things, all too small or too big, too ugly or not ugly enough. After about an hour of failed pairs, I found something that fit all the criteria. The only problem was, I could not find the box that belonged to those shoes and there was no other pair like them and so no way to know their price. I approached the attendant who had been watching the past hour and no doubt knew the time I had invested in finding the perfect shoe. I explained about the shoes with no box. We began to look in the basement together. He informed me that without the box they would be unable to ring me up at the register. We couldn’t find the box. He suggested we find another box, something reasonably priced and without shoes inside, that we could put my perfect pair in and I could bring them upstairs and make my purchase at the register. This suggestion puts us on the path to a human surety. We could find no shoeless box. What happened next is a shining example of human surety in action. Both kneeling, we continued to look. Then, I asked halfway joking, “If there is no box and no way to know how much they cost, could I just, have them?” The attendant looked up, considered my proposition, and agreed under the condition that I wear the shoes out. I thanked him and left Shoe Mania, new shoes on, old sandals in my bag. In the face of a gap in the system, we came to an understanding or a solution that simplified the exchange for all parties directly involved. Mr. Mania wouldn’t be impressed, which is why I maintain human surety is best appreciated on a small-scale local level.

I have an older friend who prides himself on the fact that he doesn’t own anything. He lives in a house, drives a car all the regular possession-holder activities, but nothing that he drives, lives in etc., is in his name. He has fine credit, is not a criminal or an illegal, he explained he simply did not like the notion of having such big items attached to his person. I know about the condition of his credit because some time after denouncing large purchases, he told me that over the years he helped out a few friends when they wanted to attach such big items to their person but could not do so due to financial disarray. He helped by lending them his name to purchase this or that, but only with the condition that he would never have to hear about the purchase again. This is just one example of people doing business amongst each other, getting around the rules of the financial system, it happens all the time, but again, they cannot teach this kind of thing because it comes in so many forms and the whole system would break down if they did.

There was a waiter in New York who worked for a very upscale fine dining banquet hall. The waiter was blind and yet he was the most elegant server of all. In fine dining in America the most common type is open hand service, meaning the waiter should never have his or her arms crossed, the table is always set the same, the food is always served from the left side and the way the dinner is positioned in relation to the diner is always the same. It is common for the lead waiter to have a secondary waiter for extra support, in this case the two men worked together exclusively. What I am trying to point out is that the blind waiter and the secondary waiter were not really serving at all which is what made them such an elegant pair. They had learned a choreographed dance that the blind man was able to perform nightly without error. The ideal fine dining server is the one that sort of disappears, as if the food magically materialized in front of the guest. The specific parameters provided by the man’s lack of sight ensured impeccable timing, efficiency and understanding of the men’s place on the banquet hall floor. If he worked in a diner or any service situation that one would assume was less demanding for the server, it would have been a disaster.

In all the scenarios above, an adherence to the regular protocol would have resulted in complete failure. No shoes for me, no houses or cars for friends, and no job for the elegant server. Human correction as a concept encompasses the capacity we have to approach tasks from all sorts of angles and triumph when it seems external albeit internalized rules and regulations bar the way. My examples are singular events and relatively insignificant but I am sure with just this light prompt you have found some cases of your own. The force of human correction is omnipresent. In my opinion, it is human beings at our best.

View all posts by
Top